In Matthew 24:34 Jesus said "Truly I say to YOU that this generation will by no means pass away until all these things occur." When I was in my teens I hated the 'truth' and planned to bail when I turned 18. But at around age 16 I got into some trouble which caused me to have to start studying the 'paradise' book with a ministerial servant from the hall. For many months I hated it, and would just answer the questions straight from the book to show my distaste. That all changed when we hit the part about the 'generation'. I was amazed; the end had to be close! That was the turning point for me when I started taking it all seriously again. It was not too long after we finished the book that I got baptized.

The problem is, as I would later find out, is that the Jehovah's Witness 'Governing Body' had changed their interpretation of its meaning six times over, even going back to earlier interpretations! See the chart at the bottom of this article to see just how many times over the years.

But if they are God's ordained organization recognized "by their fruits" that even condemn "false prophets", then why do they constantly change their interpretation of Matthew 24:34? Surely by teaching for a time things that are untrue, they themselves become false prophets by their own judgment. How can it be said that the light is getting brighter when they revert to an earlier interpretation? And what can be said about their specific false predictions about the end of the world that never came about?

True, there have been those in times past who predicted an "end to the world," even announcing a specific date. Yet nothing happened. The "end" did not come. They were guilty of false prophesying. Why? What was missing? Missing from such people were God's truths and the evidence that he was guiding and using them.

We encourage you to avoid being deceived by false prophets.

But the end of the world would be so close now if it meant what they always said it meant, basically that people who were alive in 1914 would not die. They would be 95+ years old if they were BORN in 1914!

So what would they do to fix this? What could they do to not lose their members as these older ones die off in the congregation? Kick the goal 100+ years down the road by saying that it now means the generation that overlapped the generation who was alive in 1914 of course! See the article for yourself below.

Worse yet, they don't even try to justify this new interpretation. It's like they just discount what they said before thereby pushing the date way off into the future, but don't even try to explain what exactly it means or how they decided that.

So let me try to break it down and understand what little they gave us to go on: "He evidently meant that the lives of the anointed who were on hand when the sign began to become evident in 1914 would overlap with the lives of other anointed ones who would see the start of the great tribulation."

So who is the "the anointed who were on hand when the sign began to become evident in 1914"? That sounds to me like we're not talking about those who were born in 1914, but rather ones who were already old enough to realize that they were of the heavenly class at the time (anointed and on hand), right? So how young does someone usually know this? 20 maybe? They'd be over 116yrs old today!

The next part defines those who would overlap as "lives of other anointed ones who would see the start of the great tribulation." Lives seems to be the key word here, and sounds to me like those who were born before the anointed ones mentioned above die off.

So let's play with numbers a bit. If we use the ripe young age of 20 and anointed in 1914, and assume that they died at the old age of 100, the next generation of anointed ones could be 16yrs old right now. That's a little too young to even realize they are anointed yet! But let's say that the new driver lives until 100yrs old also, that's 84+ years from now! They launched the goal past most of our lifespans!

Indeed, don't be "deceived by false prophets", even when they try to call it 'new light'. 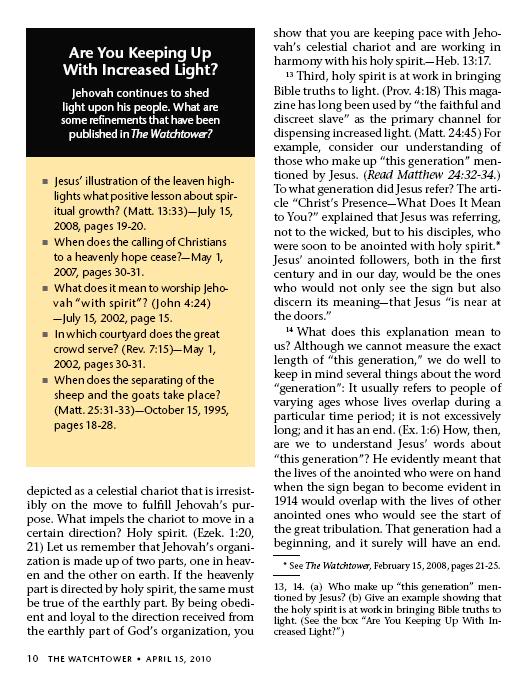 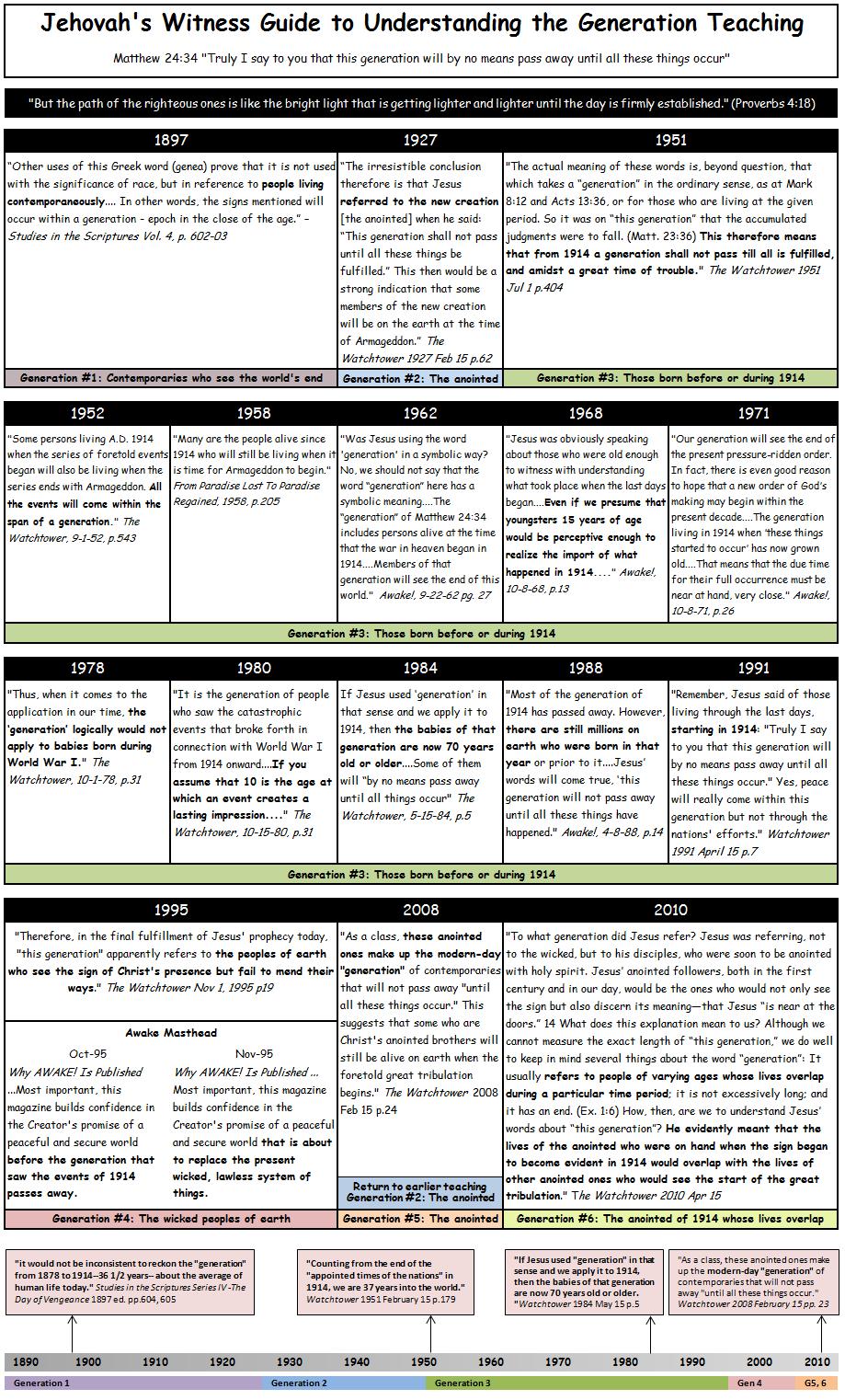 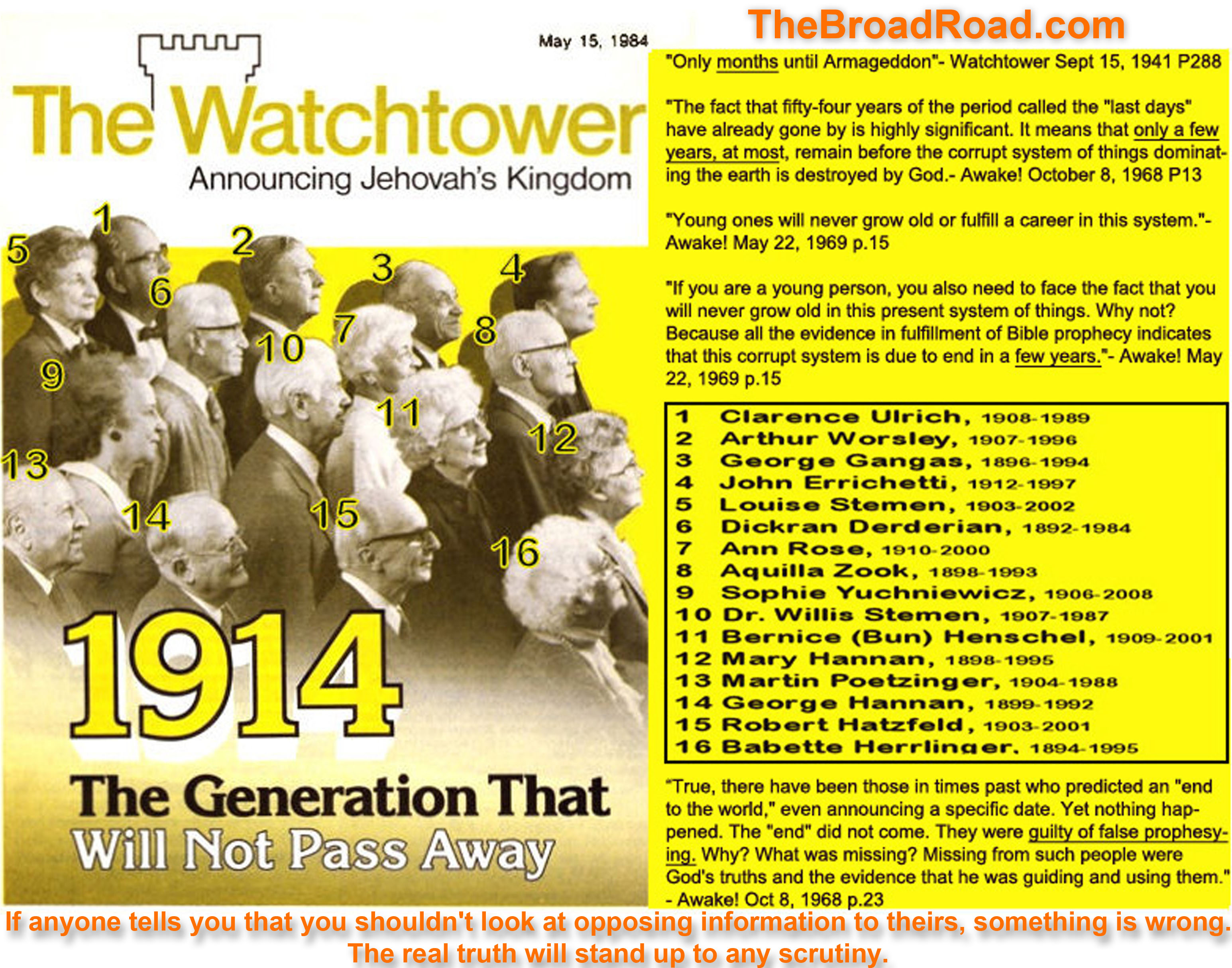 The End of the World is Near, Again!