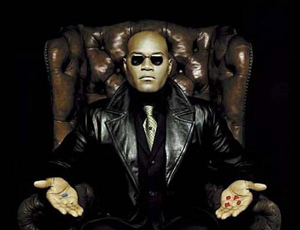 So you've decided to take red pill. This means you would prefer to know the real truth no matter what it is, even if the answers aren't what you had hoped.

As a Jehovah's Witness, we've spent plenty of time using common sense reasoning and the Bible to discredit other religions false teachings. The logic such as 'what kind of loving God would burn humans forever and ever, what would be the point of that' and 'why would God destroy the entire planet Earth just because two humans made a mistake' is the same common sense reasoning that you may have turned off once you were certain your religion was better than all the others. So it's easy to feel confident that you have the real truth, afterall where else could you possibly have left to go?

But now it's time to be honest with yourself and take one more hard look at the Bible itself and use that refined common sense and scrutiny to see if it is actually the 'truth' or not.

Sadly, some misguided Jehovah's Witnesses who are 'stumbled' become upset with the religion for something that happened to them personally, but because of their need for religion in their life and a hope for something after death they wind up in another religion...going from the mud to the sewer. Don't let that be you!

As Jehovah's Witnesses you may find yourself also scientifically uneducated on many things, having only learned your version of science as the Watchtower fed it to you. Evolution for example you will find is not 'only a theory', it is a 100% proven scientific fact. But don't take our word for it; it's time you did the same amount of study you gave to the Bible on proving this to yourself. You will find that it is not a debate between two viewpoints that you can't understand for yourself, evolution is actually quite easy to understand to the point where you could soon defend it.

Again, don't let anyone feed you the answers, that's what got you into this false religion in the first place. It's time to boldly look at the facts no matter where they take you. If anyone tells you that you shouldn't look at opposing information to theirs, something is wrong. The real truth will stand up to any scrutiny. Boldly look into all of the facts, fear none. Even if you are reading all of this now and it frightens you some, just remember that if you were preaching one day and met someone with these viewpoints, you should be able to defend them. Don't be afraid to learn all viewpoints, even if just to embolden your own religious beliefs.

We encourage you to go deeper into the rabbit hole. Read these articles in whatever order you wish. There is room at the bottom of each for comments, feel free to tell us if you find any of them to be unfactual.

After doing so, educate yourself further by watching these videos on a variety of subjects.

There is freedom in knowing the real truth, to live a good moral life based on that truth.

Finally, know that you are not alone! There are millions of exJWs who went through this same learning experience, and they are still the same good-hearted people you knew at your Kingdom Hall...just more educated now. We are not demonized apostates trying to fool you into our ways of thinking. We want to help you, and you will not be alone.

Welcome, to The Broad Road!

Comments
Order by:
Per page:
Actions
Subscribe
Rating
1 votes
Recommend
Home
›
Articles
›
The Red Pill
About Us Privacy Terms FAQ Invite a Friend Contact Us Bookmark
Copyright © 2021 TheBroadRoad.com
Please, enter a value here
Are you sure?