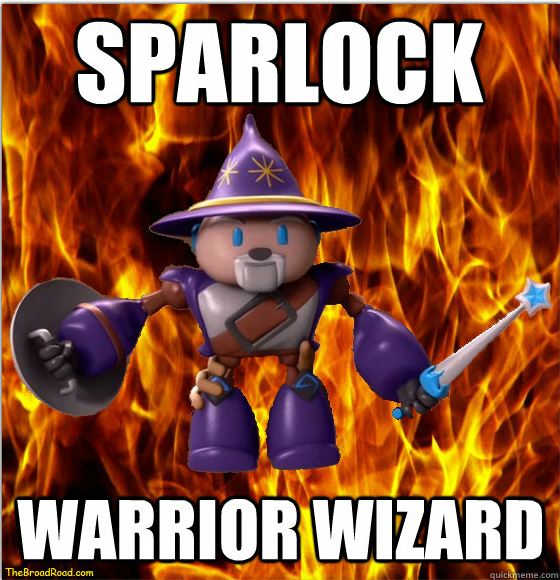 If you haven't already heard, a Pixar-like DVD entitled "Become Jehovah's Friend" is being released at the newest District Convention of Jehovah's Witnesses with the intent for use on very young children. But it was leaked early from Bethel insiders on the internet via YouTube, and the Watchtower Society got the original video taken down by filing a copyright infringement claim. This was futile however, as many are continually reposting the video all over the internet to keep it alive. One wonders why they would want to keep this video off of the internet so bad since it's free and should only boost their support. The video is clearly psychologically abusive, and the backlash from the public is clearly the reason for continual their work on removing it.

In this now most infamous video, a character is introduced as Sparlock The Warrior Wizard, a simple toy given to the child by a friend.  Here is the video, article continues below:

Here you see this kid so innocently happy, having fun with his toy given to him by a friend and then BAM! 'Sorry son, you're just not feeling guilty enough today, you're looking too happy. We need to bring that demeanor down, wayy down. You are making God sad. There now, don't you feel like crap? That's better?' With the very manipulative looks from the mom who guilts Caleb with black, ugly, painful guilt until all his happiness is not only washed away, it is used to make him feel bad about himself for ever being happy in the first place. It ends with the kid throwing the toy away instead of even giving it back to the giver. This video reeks of cult propaganda.

This shows the horrible life that the Governing Body apparently wants all children to have, and more importantly by the subtitle of the DVD being "Listen, Obey, and be Blessed" they clearly want control.
And perhaps someone should educate them that magic isn't real.

You can also gather that the message here is that anything that portrays magic is evil and to be rejected. This means every innocent thing from Cinderella, to Snow White, to Mickey Mouse (Fantasia), to Shrek, to Harry Potter, and yes even Star Wars would all have to be shunned.

The backlash to this video was immediate, with Sparlock The Warrior Wizard becoming the new mascot for exJWs, alongside the famous demonized Smurfs who we were told as children jumped out of a girls purse at a Kingdom Hall and ran out of the building.

Oddly too, the 'Special Edition' DVD itself only contains two lessons on it, along with a governing body intro and children's sing along. The total file size is only 700Mb, small enough to fit on a CD. Will the regular edition be longer? We don't yet know. You can download the full Special Edition via torrent file below.

If this sort of psychological abuse angers you too, please join The Occupy Sparlock movement and help make our voice heard against this family-destroying cult!