The Watchtower article entitled “While You Are Young, Choose to Serve Jehovah” is a call to the children of Jehovah's Witnesses to get baptized:

You young ones in the Christian congregation; have you made a dedication to Jehovah? Many may find the choice to serve the true God difficult to make.

However, while the Watchtower Society is all for child baptism, they are very much against infant baptism:

Baptizing an infant is wrong because a baby cannot understand, make a decision, and become a disciple. Those baptized during Philip’s ministry in Samaria were “men and women,” not mere infants. (Acts 8:4-8, 12) Baptism is for those old enough to learn, believe, and exercise faith.

But since baptism is such an important life-changing step, would baptism of very young children be much different from infant baptism? Apparently they believe it is, check out just a few examples:

And yet did you know that there is not one example of a youth baptism in the Bible? In fact, Jesus himself wasn’t baptized until he was 30 years old! However where this subject gets quite confusing is when comparing the society’s push to get baptized young versus getting married, it’s a whole different story! The advice is to wait:

the Bible sets no minimum age for marriage. But it does recommend that before marrying, one should be “past the bloom of youth. Why? Because such young people are just in the early stages of developing the emotional maturity, self-control, and spiritual qualities necessary to handle married life.

So why hurry young ones to get baptized so young, why not wait until they are full adults that have the matured 'spiritual qualities' that can clearly understand the decision? Oddly, that is exactly what they tell them to do regarding marriage:

Why not honestly examine yourself, your likes and dislikes? Do you not see that your appreciation for life has been enhanced by the passage of time? Did you have the same values at 13 that you had at 5, or the same values at 20 that you had at 13? Has your understanding and appreciation for life grown or lessened as you have gained greater experience over the years? - Is it not often true that the “only” boy in a girl’s life when she is 16 or 17 years old is long forgotten as she grows to womanhood and attaches greater importance to a man’s godly traits and personality?

So they say here that 17 is too young for marriage, but 10 is old enough to finalize your religious beliefs for the rest of your life? Is a life-long dedication to God not a much more important decision than that of getting married? So why then does the Organization ignore the Bible and its own advice on maturity when baptizing teenagers and even pre-teens, some as young as 10 years old?

a lot of young people hesitate to get baptized because they fear it’s a final step that they can’t back out of. They feel that if they do something wrong, they’ll be put out of the congregation.

It's because after baptism in which the person pledges 'association to God's spirit-directed Organization', that child can no longer choose to leave the religion without severe consequences, namely 'disfellowshipping' where they are ostracized by their friends and even their own family. Imagine, shunning a child!

God’s Word commands Christians not to keep company or fellowship with a person who has been expelled from the congregation...The Watchtower of September 15, 1981, page 25, says: “A simple ‘Hello’ to someone can be the first step that develops into a conversation and maybe even a friendship. Would we want to take that first step with a disfellowshipped person?

Jehovah's Witness children are also raised in a closed environment, only allowed to associate with other Witnesses. So how could they possibly be prepared for such an important life-long decision only knowing one viewpoint of reality?

Probably your religion was decided for you by your place of birth, over which you had no control. Surely, nothing is lost by examining what the Bible says about God.

And worse yet, changing one's mind later in life has even worse consequences than simply leaving it behind, as then you are labeled one to be despised...an Apostate! 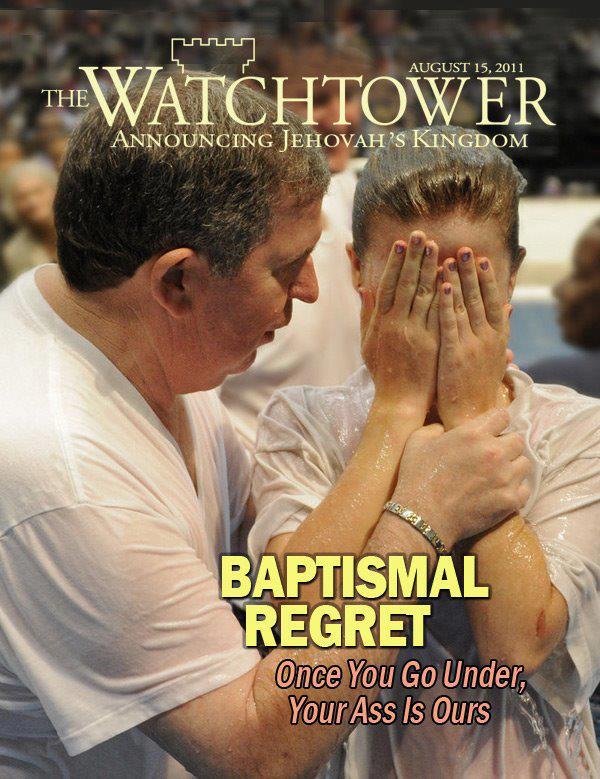 Comments
Order by:
Per page:
Actions
Subscribe
Rating
1 votes
Recommend
Home
›
Articles
›
Baptism vs. Marriage: When Spiritually Ready?
About Us Privacy Terms FAQ Invite a Friend Contact Us Bookmark
Copyright © 2021 TheBroadRoad.com
Please, enter a value here
Are you sure?